I live a pretty ho-hum life. I get up early, working on my writing for a bit (or that’s the theory), head into the my job at the newspaper where I busy myself for the next nine or so hours, then head home to have dinner with hubby, after which collapse into a coma-like state on the couch until he rouses me to go to bed. The next day I get up and do it all over again.

In my head, however, danger is rarely too far from my side. I have a worst-case-scenario mind, meaning that I’m liable to conjure up trouble even when none exists. Add to that my extreme gullibility, and I’m a walking/talking mass of susceptibility to anything spooky. 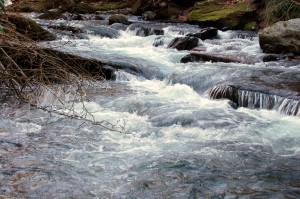 This isn’t new. I’ve been like this my whole life. During a hiking outing as a young Girl Scout, I refused to cross a log “bridge” over a stream because I’d pictured myself falling in, swept away by whitewater, eaten by … whatever creatures lurked in the rivers of Central New Jersey. (I shudder still!) 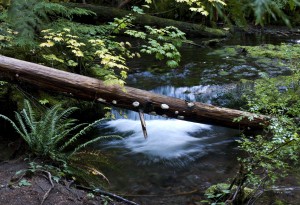 In reality, the “river” was probably little more than a creek, the “whitewater” a trickle. When I think of that poor leader who had to sit with me while the rest of the troop went off adventuring…I want to duck into bed and pull the covers over my head with embarrassment. (If by any chance you’re reading this….I’m sorry!)

So when it came to overnight camp-outs, “nervous” hardly described my state of mind. Even safely ensconced in the tent (burrowed so far down into my sleeping back I was probably at risk of suffocation), I imagined insects hovering inches over my head waiting to feast on me. (In fairness, they probably were. We were camping in the woods, after all.)

And then the stories would start. First, the legend of Mr. Nomoco, a tall, skinny man who at one time owned the property. His ghost roamed the site of the campgrounds, waiting for young girls to brave the night to trudge through the mists to the latrines while bats sang overhead. (In reality, there was no Mr. Nomoco, alive or ghostly. Nomoco was an abbreviation for the Girl Scout campground — NOrthern MOnmouth COunty.)

The spookiest, though, was the legend of the Jersey Devil, a hoofed, leather-winged creature that patrolled the woods of the Pine Barrens (southern and eastern Jersey) for its supper. (Human, of course.)

The legend tells of Mr. and Mrs. Daniel Leeds who lived in what is now Atlantic County in the mid-1700s. Upon the birth of their 13th child, Mrs. Leeds shouted, “He’ll be the devil,” or words to that effect, at which point the newborn turned into the creature and would forever haunt the woods in the area. It was cruel and heartless…and relentless. (Think of the velociraptor chasing the kids in the lab in Jurassic Park.)

And it has scared the you-know-what out of hapless scouts and campers for more than a hundred years.

I wish I’d known then what I know now: That according to Brian Regal, professor of the history of science at New Jersey’s Kean University, the “Jersey Devil” was born of a running fight between the Leeds family who published a political, anti-Quaker almanac called by some as heretical, and rival Benjamin Franklin.

In the November/December 2013 issue of “Skeptical Inquirer,” Regal writes that Titan Leeds, who took over as publisher from his father , founder Daniel Leeds, “…redesigned the masthead to include the Leeds family crest, which contained three figures on a shield. Dragon-like with a fearsome face, clawed feet, and bat-like wings, the figures, known as Wyverns, are suspiciously reminiscent of the later descriptions of the Jersey Devil.”

In 1732, Franklin launched his “Poor Richard’s Almanac,” and in an attempt to boost sales in 1733 ran an item that predicted a date that his “devilish” rival would die. After that, Franklin referred to Titan Leeds as a ghost. (Apparently it was meant in fun. Imagine what would happen today! Talk about political mud-slinging!)

It wasn’t until the early 20th century that the now-familiar story of the winged creature started making its rounds of campfire circles. And from there the legend took root and thrives to this day.

I wish I had more time. I’d tell you the one about the young lovers whose car breaks down on a lonely stretch of road deep in the woods of the New Jersey Pine Barrens…. 🙂

To read more about the legend, go here: