My husband and I spent the month of July painting the interior of our house. It’s relatively small 3-bedroom home, so when we got the quotes to have it professionally painted, I said (in my ignorance), “We can paint ourselves!”

The last time we painted was about…oh, thirty years ago, so  I had forgotten what a tough job it is, especially getting into those nook-and-cranny spots, like above the kitchen cabinets! Not to mention the strength it takes to roll paint onto a ceiling!

But we kept at it. Finally, after a month of working together every weekend, and me every day (I had the summer off), plus some help from our kids, we cleaned the last of the brushes and stowed away the unused paint. It was messy work, and I can still see paint-colored strands if I examine my hair closely! But we’re really happy with the results.

On the even brighter side, my husband and I are still married <grin>, and I lost five pounds!

On the writing side, for those who like scary stories, and who like to hold an actual book in their hands, I’m excited to announce a new print version of three of my previously published stories. I’ve titled the collection Murder Times 3. (Catchy, or no?) 🙂

Murder Times 3 is a collection of a novella and two short stories that deal with murder, suspense and (for two of the titles) ghosts. 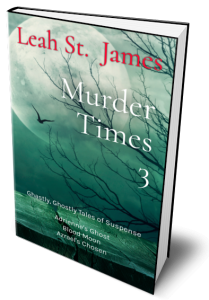 FBI Agent Jackson Yates and parapsychologist Rachael Sullivan join forces to investigate the murder of former FBI recruit Adrienne Garza. While Adrienne, whose body is discovered in the basement of FBI Headquarters in Washington, D.C., helps point the way to her murderer, sparks fly between Jackson and Rachael, and a romance is born.

A true crime book reviewer is fascinated by a series of murders that took place years earlier on a stretch of beach where she and her husband live in Southeastern Virginia. Her fascination turns to unease, then terror, as she finds herself embroiled in what could be the killer’s return to the scene of the crimes.

Follow New Jersey State Police Detective Shannon Morgan’s investigation of a grisly murder in the depths of the New Jersey Pine Barrens. As Morgan tracks the killer, she finds herself the next to be chosen.

The collection is available at Amazon.com