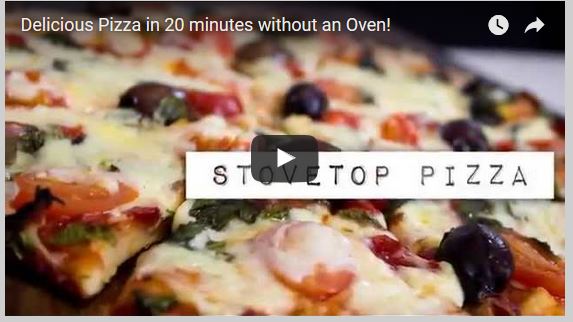 Ever since I left New Jersey about 9 years ago, I’ve been bemoaning the lack of really good NY-style pizza. Hubby and I have been experimenting with home-made for a couple years. Sadly, the dough has been challenging to the point where it’s not worth it.

Then I saw this posted on Facebook: home-made pan pizza that takes about 20 minutes. Looks easy-peasy, according to the video anyway.

I watched it probably a dozen times, wondering if I could pull it off. (I mean, plenty of things that LOOK easy don’t turn out the way you want.) My big question wasn’t mixing the ingredients, it was the cooking part: How hot is the burner supposed to be?

Now, if you have an electric stove top like I do, you know electric is hard to control. (O, for a gas stove!) Nowhere in the directions does it indicate temperature.

I figured “medium” would be good for a cooking temp, but because it takes a while for my burners to heat up, I preheated it, then put the pan on, vents closed as indicated.

All seemed to be going well until I smelled it…burning food.
ARGH. I turned the heat down…a lot…and continued to cook according to the directions.

The result? I had too much sauce, probably double what I needed. The dough was okay, but not like real pizza. Not even close actually. And it was BURNED in the center. Sigh. And UGH.

Hubby was very kind in his assessment. “It’s not BAD,” he said, but after many years of togetherness, I can read the tones. It was probably a step up from frozen. Maybe.

I’m not sure I’ll make it again, but I’ll keep trying!

If anyone has a really good home-made pizza recipe (with easy dough), I’d love if you would share!