Sam Herrmann is a 30-something accountant, married for more than a decade to Danielle (Dani). Their paths crossed one hot summer night when he was running laps for their college’s football team and she, a flutist in the marching band, was at band practice. They fell, and fell hard, for each other and have been together since.

Now, a dozen years later, they have three healthy boys under the age of ten, and enough activities packed into their daily lives to fell the Energizer Bunny. Dani is a planner, and a perfectionist when it comes to motherhood.

To Sam it’s a lethal combination of go-go-go and stop-stop-stop. When it comes to their kids, and their lives together, there isn’t anything she doesn’t control–schedules, friends, activities, down to every morsel that goes in their mouths.

Where Dani has no control, however, is with the pocketbook. Sam makes a decent living at his job for a 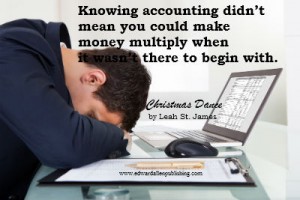 defense contractor, enough to provide a decent home in the New Jersey suburbs. But no matter how much he budgets, the funds never stretch far enough. Worse, Dani seems oblivious to his efforts, and the emotional strain she’s placing on him to provide more, more, more.

Worse than that, there is no time for them…no time for him. He barely remembers what it’s like to have a wife.

Then he meets Alexandra Anderson–sweet, funny and so unsure of herself despite her beauty. She asks nothing of him. And she listens when he talks.