I must confess, I don’t pay much attention to Phil. For one thing, since moving to southeastern Virginia, where the weather changes as frequently as what’s playing on the TV in my house (translation: at least six times an hour, if my hubby has the remote), I’ve learned not to trust forecasters, at least not long term.

Our meteorologists seem to have a grasp on the day’s weather, but not so much for the next day, or the next week. So I just don’t worry about it, until that date approaches. It is what it is.

You can’t mess with, or second guess, Mother Nature. I don’t even try.

I do have some fun, though, when it comes to winter weather. I spent my entire life in the northern climes, until about seven years ago when my hubby and I decided to try southern living… or our version of it. We settled in an area with a huge military complex, which means it’s a melting pot of natives and transplants from all over the country, even world.

We figured we’d feel comfortable here. And we do. We enjoy learning southern customs and love the graciousness of the people here. At the same time, we can’t help retaining some of our northern habits. While I find myself acclimating to the warmer climate, as soon as we get a taste of the north, it all comes back…in a jiffy. 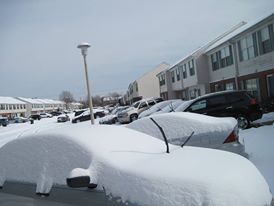 Here’s a fun picture my son took of cars in my town when we had a big (for us) snowfall last week. People had lifted their wiper blades from the windshield surface, presumably so they wouldn’t freeze to the glass.

Now, I’ve seen more than my share of snowstorms and blizzards, but we never put our wipers up like that. I figure if they’re going to freeze, they’re going to freeze, regardless of their position. I’d rather mine were covered with snow than sticking up, vulnerable to pranksters who can’t resist the temptation of snapping them off! But like I said, different people, different cultures.

Luckily, our weather is as changeable as….never mind, we already covered that. So two days later we were in the 40s, and today we’re close to 60 (before dropping lower next week). The snow is gone, people felt safe to put their wipers back :-), and we just might see a flower pop through the grass any day now.