This blog originally appeared on the Roses of Prose, May 22.

Despite the fact that I’m a native of New Jersey (the GARDEN state), where I used to have thriving vegetable garden, and a bed of hostas that threatened to overrun the neighborhood, I’ve rarely had success with potted plants. In fact, gifting me with a plant is usually gifting the plant with early death! I’ve even killed plants that have been left in my care, at home and at work. (I did give the owners ample warning. They just didn’t believe the severity of my plant care challenges!)I think the problem has to do with my ability to sense moisture with my fingers….I can’t. I mean, I stick my finger in the pot of soil, and I feel temperature, not moisture. People who have this ability get cranky with me when I insist I can’t tell if the soil is moist. “I just feel cold!” I’ll wail in the face of their skepticism.So I’ve learned to judge need for water by the weight of the pot. If it’s light (in relation to its normal weight), then it’s dry.

Anyway, most of my friends and family know of this disability of mine, and they work around it. But about a year ago, I received a gorgeous hibiscus plant (see left photo) from someone close to me (who should have known better!).

After three or four months, under my well-meaning nurturing, it was near dead–droopy, mottled and infested with spider mites. (When I saw the little cobwebs between the leaves, I thought, “Wow, you really ARE a lousy housekeeper! Even your plants get cobwebs! And when I found out they were from bugs…ewwwwww.

I immediately quarantined it to keep the little bast—bugs from jumping onto its neighbor, my prized African violet…which I haven’t yet managed to kill. (Another success story I’ll tell you about another time.)

I was desolate, despondent! So I turned to Google and found a site that said the ONLY true solution to spider mites is to give the plant a bath. Yes, a bath…in the bathtub (something I hadn’t given myself, in the bathtub, that is, in years)!

So off I went to bathe my hibiscus, expecting the poor thing would die a slow and painful death. But amazingly, it worked. Now look at it. It’s growing like crazy! (Check out the yardstick measurement!)

The other day  I was bemoaning the fact that although it seems really healthy now, there are still no blossoms…at which point I turned again to Google, and according to what I found, it might not be getting enough sunlight. So I put the plant on my patio during the day over the weekend, and it got a couple long days of soaking up the rays. No buds yet, but the leaves are brilliant green and shiny (and still not a “cobweb” in sight)! Maybe my plant curse has lifted, I thought!

This year I received a beautiful geranium from the same person who gave me a hibiscus. Flush (and cocky) with the success of the hibiscus, I decided to let the geranium do some sunbathing as well. After all, according to my Google research, they like the full sun, and they’re drought tolerant. 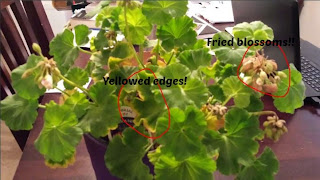 But I think I’ve struck again! After one measly afternoon sharing the patio in the sun, the plant’s buds withered, and the edges of the leaves turned a sickly yellow. Some leaves turned completely yellow. UGH. And the pot felt really light.

I immediately brought it back inside and turned to Google. It seems the yellowed leaves mean not enough water…or too much. Aaaaaaah! So I gave it some water, but I think it might be too late! So far it hasn’t recovered.

I give up. I’m keeping my fingers crossed that the person who gave me the plant doesn’t ask about its health. Less than a week. This is a new record for me!

If you’re the praying type, please add my plant to your list…it needs it!